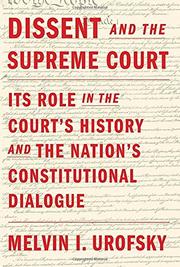 DISSENT AND THE SUPREME COURT

Its Role in the Court's History and the Nation's Constitutional Dialogue

by Melvin I. Urofsky

A distinguished legal historian looks at how dissents have influenced our understanding of the Constitution.

Mindful of the institution’s authority and prestige, chief justices have always preferred that the Supreme Court speak with one voice. But disagreements—hardly surprising among powerful personalities asked to navigate the most difficult legal issues—have always been a part of the jurisprudence. While it’s true that most dissents are eminently forgettable, some have contributed mightily to our ongoing Constitutional dialogue. The dissenters address first, of course, the majority, pointing out weak arguments or misunderstood facts; second, the bench, bar, and legal academy; third, the other branches of government; and finally, the public and posterity, all in an attempt to move the law in a direction the majority declines to follow. In this scholarly yet wholly accessible treatment, Urofsky (Emeritus, Law, Public Policy, History/Virginia Commonwealth Univ.; Louis D. Brandeis: A Life, 2009, etc.) chronologically examines notable dissents and dissenters in the court’s history and considers the phenomenon from all angles, including how even the threat of a dissent can help shape the majority opinion. He supplies illuminating discussions of John Marshall Harlan, Oliver Wendell Holmes, and Louis Brandeis, great dissenters whose opinions “carried the seeds for growth and the future transformation of judicial doctrine.” Readers will appreciate Urofsky’s resurrection of some lesser-known justices—Stephen Field, Wiley Rutledge—and their contributions to our Constitutional discourse. Also noteworthy is the author’s dissection of the rhetorical combat among Franklin Roosevelt appointees, his tracking of the evolving understanding of privacy, affirmative action, and sexual orientation from the Warren through the Roberts court, and his treatment of the “permanent dissents” on capital punishment cases. Whether it’s Jackson on wartime internment or Black on the right to counsel, the very best dissents constitute, in one scholar’s words, “buried ammunition for future generations to unearth when the time comes.”

A lifetime of scholarship and an elegant pen combine for an outstanding read.