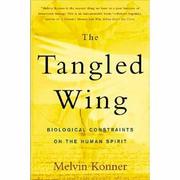 THE TANGLED WING: Biological Constraints on the Human Spirit

The ""tangled wing"" is Konner's baroque metaphor for the human condition--suggested by an expert's comment on the archaeopteryx, known only as a crushed tangle of bone and rock: ""It's a piss-poor reptile and it's not very much of a bird."" We too are in a tangle--neither genetically-determined nor free to break all biological constraints. Konner, a young Harvard behavioral anthropologist (now in medical school), deals with the constraints in such notorious areas as male/female differences, violence, love, nature-nurture, and intelligence. Undaunted, he takes on all comers--sometimes jousting with Skinnerians and other arch-environmentalists, sometimes scoring the sociobiologists, Jensenists, and other arch-believers in genetic-destiny. His own, eclectic point of view is informed by studies of human groups and Primates, by investigation of rodents, by ethological observations, and by a variety of human behavioral data drawn from the neurosciences, Psychiatry, psychoanalysis, and experimental psychology. The text, an undergraduate course in embryo, is especially rich in discussions of emotions: fear, aggression, joy, love, grief, and so on. Konner extols, in particular, the limbic system of the brain. Papez, in the Thirties, and MacLean and other younger neuroscientists have made the hypothalmus, the hippocampus, the amygdala, and other brain nuclei the subject of telling experiments revealing the circuits and chemicals involved in each emotion. These studies, says Konner, provide ample reason to believe that males are more aggressive, females more nurturant. (As a safeguard against war, we ought therefore to have more women in high political office--excepting today's ali-too-masculine incumbents.) He has much to say also about the development of attachment and love--following Bowlby, but also quoting the distinguished neuroanatomist Walle Nauta (who sees the maturation of the limbic system at around seven months as possibly explaining the separation anxiety that occurs around that time). Generally, Konner brings to each subject an absorbing amalgam Of lab-bench and behavioral-study data, achieving a synopsis of what is known. The potential for good and evil co-exist, he concludes, and to free our tangled wing, we need to restore spiritual values and a sense of wonder. Occasionally, his enthusiasms embarrass--but for the most part Konner covers complex ground with subtle humor and fine imagery.