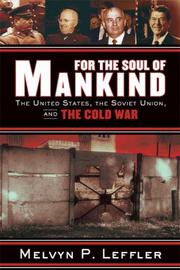 FOR THE SOUL OF MANKIND

The United States, the Soviet Union, and the Cold War

The Cold War began under murky and not entirely planned circumstances governed by individual personalities. So, writes Leffler (History/Univ. of Virginia; The Specter of Communism: The United States and the Origins of the Cold War, 1917–1953, 1994, etc.), did it end, thanks to two personalities in particular.

The U.S. and the Soviet Union made sometimes uncomfortable allies in the war against Hitler, but they were allies all the same. When that war ended, Leffler observes, there was a world to divide up; Stalin had his agenda, but so did Harry Truman, who demanded that America enjoy 85 percent of any given pie rather than a nice 50-50 split. Stalin took a dim view of that math; and in all events, when the U.S. announced that it would never again be caught napping or give up its military superiority, and that it would “hold the atomic bomb as a ‘sacred trust’ for all mankind,” Stalin felt hemmed in, even blackmailed. Leffler does a creditable job of depicting the ensuing Cold War from the point of view of the Soviet leadership as well as from the already well-documented American one, and he turns up surprises: one, for instance, that the Soviet leadership, urged along by Lavrentiy Beria, was exploring the possibility of allowing German to reunify as a neutral power, a far better alternative in his mind than “a permanently unstable socialist Germany whose survival relied on the support of the Soviet Union.” That plan went nowhere: Stalin died; Beria was executed; and another generation of East-West confrontation would ensue. Leffler’s interest lies in the personalities of the leaders who enabled détente, and finally an end to the Cold War—foremost among them, in his assessment, Mikhail Gorbachev, who “made the most fundamental alterations in his own thinking” in order to accept a fundamental shift in the world’s political order. (Reagan had something to do with it, too, writes Leffler. But Jimmy Carter and Leonid Brezhnev? Useless.)

A well-balanced and illuminating history of the Cold War.