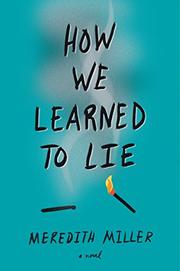 HOW WE LEARNED TO LIE

Two teens struggle to make sense of their relationships with their families and each other as drugs, violence, a bad cop, and their own inexplicable choices change everything.

Joan has a mind for biology and a passion for sea creatures. Her best friend, a boy nicknamed Daisy by his mother, has a passion for figuring out the telephone network and using pay phones to learn things he’s not supposed to know. Neither understands the other’s particular fascinations, but the two have been best friends since they were little and cannot imagine life without each other. Joan has been angry about her family’s secrets and silences since her mother moved from the outskirts where they live into New York City to pursue work in the theater. When Daisy’s reckless older brother, Robbie, shows up with someone else’s blood on his hands, Joan becomes determined to figure out what kind of trouble Robbie is in. However, Daisy pretends that nothing is wrong, and that lie cracks their bond of trust and ushers in many more lies between them. Set in 1979-80 and using alternating narrators, Miller’s (Little Wrecks, 2017) tale offers a stunning portrayal of platonic love, the forces that push people apart, and the pains of growing out into the world. Joan is black, and Daisy is white.