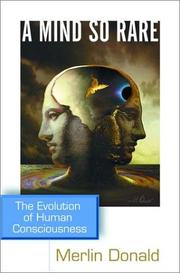 A MIND SO RARE

The Evolution of Human Consciousness

Although scientists and philosophers don’t pretend to understand the neurological mechanism of human consciousness, they are eager to theorize about it. Donald (Psychology/Queen’s Univ., Toronto) reviews the evidence and explains how he believes the brain converts sensory input into awareness.

He begins by denouncing his opponents. According to the author, a school of evolutionary thinkers called the neo-Darwinians views human nature as fixed in genetic concrete. It follows from this that thinking, behavior, emotions, and language are hard-wired deep in our unconscious. Consciousness facilitates the working out of these mental processes, but it otherwise has little importance. The author disagrees vehemently with these “hardliners.” He proposes instead that the human mind occupies a unique place in nature, not because of its structure but through its ability to absorb culture (i.e., the interaction of many minds): human consciousness, according to this view, is actually a hybrid product of biology and culture. As a result, the key to understanding intellect is not the design of a single brain but the synergy of many brains. Marshalling studies from neuroscience as well as behavioral research on humans and animals, the author portrays consciousness as a revolutionary development central to human evolution, and he goes on to explain how the intellect might adapt to a future of increasingly symbolic technology. Although dense with closely reasoned argument, analysis, and theory, this study rewards careful reading—but it is also a heated polemic, full of sarcasm and dripping with contempt for the neo-Darwinians (whose arguments are made to seem extreme as well as weak).