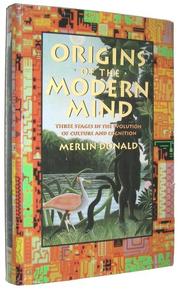 Three Stages in the Evolution of Culture and Cognition

``The modern era, if it can be reduced to any single dimension, is especially characterized by its obsession with symbols and their management.'' So says Donald (Psychology/Queen's Univ., Kingston, Ontario), echoing the philosopher Ernst Cassirer a generation ago—with a difference. Whereas countless philosophers since Aristotle have attempted to define what is quintessentially human, Donald brings new knowledge of neuropsychology, ethology, and archaeology to propose a tripartite theory of the transition from ape to man. Using the fossil evidence of braincase size and tool-kit remains, Donald concludes that the australopithecines were limited to concrete/episodic minds: bipedal creatures able to benefit from pair-bonding, cooperative hunting, etc., but essentially of a seize-the-moment mentality. The first transition was to a ``mimetic'' culture: the era of Homo erectus in which mankind absorbed and refashioned events to create rituals, crafts, rhythms, dance, and other prelinguistic traditions. This was followed by the evolution to mythic cultures: the result of the acquisition of speech and the invention of symbols. The third transition carried oral speech to reading, writing, and an extended external memory- store seen today in computer technology. This summary, however, does not do justice to Donald's careful analysis of rival theories as well as his mining of the neuroanatomical and neurological literature, presenting, for example, evidence of the distribution of language skills across both hemispheres. He gets high marks, too, for pointing out how often cognitive theories become caught up in the trap of the homunculus—the little man in the brain who presides over all our conscious activities. Needless to say, his theory is open to challenge as well (the relation of mimesis to language; the constant reliance on computer metaphors; and, ultimately, the use of Western tradition as the paradigm of human evolution). Withal, a fine, provocative and absorbing account of what makes humans human.