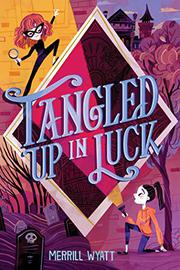 TANGLED UP IN LUCK

From the Tangled Mysteries series, volume 1

Can a popular athlete and the class oddball find $13 million worth of missing 19th-century jewels?

Sloane—aka Slayer Sloane, the Volleyball Queen—really, really doesn’t want to do the class project with Amelia, who dresses up in costumes and makes melodramatic YouTube videos. Amelia doesn’t care about staying under the radar like a normal seventh grader, which makes her a target of bullies. But Amelia does have some pretty good ideas about how to handle the assignment: namely, solving “the Mysterious Case of the Missing Jewels.” Way back in 1887, two best friends in rural northwest Ohio had a falling out: Thomas Kerr, circus clown and carpenter, stole fabulous jewels from millionaire Jacob Hoäl, after which both men died in the same tragic train crash. As the secrets of the past unfold, the girls (who are both White) learn of two tragic and angry families in which people in generation after generation died young. Even as their friendship grows, a foreshadowing narrator makes clear they’ll eventually be brought to a dangerous crisis. The moral journey, unambiguous but not cloying, builds to a crescendo featuring a cinematic monologue as satisfying as hot soup on a cold day. The unraveling of the town’s mysterious past is evocative of Louis Sachar’s Holes.