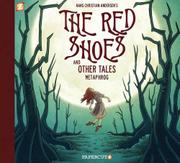 THE RED SHOES AND OTHER TALES

In this slim anthology, two of Hans Christian Andersen’s timeless tales are visually reimagined and presented along with one original offering.

Hailing from France and Scotland, respectively, Sandra Marrs and John Chalmers, collectively known as Metaphrog, have envisioned three dark fairy tales to make this slender collection. The first tale, Andersen’s "The Red Shoes," is rendered in a muted palette dominated by washed-out blues and punctuated by splashes of rust-colored red. It recounts the familiar tale of a young girl obsessed with a pair of scarlet shoes that causes her to dance without end, until she must cut off her own feet to quell their perpetual motion (depicted graphically but bloodlessly). The second, "The Glass Case," is an original, sepia-toned tale of a young boy who's beaten and unloved at home and who befriends a doll at a museum, eventually running away to be with her. The final piece is the well-known "The Little Match Girl," which uses austere, glacial grays to tell the story of a young girl fruitlessly trying to sell matches on a cold, bleak winter night. Similar panel sizes and layouts and a homogeneous tone throughout create a smartly cohesive and atmospheric collection, each vignette made distinctive by a carefully selected color scheme. This is a must-read for fans of Emily Carroll's Through the Woods (2014).