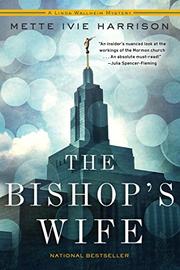 A Mormon bishop is called to serve part-time, not lifetime, and his wife has no official standing. But Linda Wallheim strives to help her husband, Kurt, cope with the many calls on his time. When they’re awakened early one morning by Jared Helm and his 5-year-old daughter, Kelly, Linda has no inkling how profoundly their lives will be changed by Jared’s claim that his wife, Carrie, has left him. Linda has 5 grown sons, but she can’t forget the loss of her stillborn daughter, and little Kelly captures her heart. When the girl tells Linda that her father dropped her mother off somewhere during the night, Linda wonders whether Carrie really ran away. Carrie’s wealthy, angry parents are equally skeptical. As the police begin an investigation, Linda, who’d like to do more with her life, strikes up a friendship with Anna Torstensen, whose husband, Tobias, is gravely ill. Anna, who has a graduate degree and worked in banking before marrying Tobias, is just the sort of independent woman Linda would like to be. Although she has no children, Anna has raised the two boys from Tobias’ first marriage as her own. Now that Tobias is dying, he rambles on about visiting his first wife’s grave even though nobody knows where it is. Despite Kurt’s entreaties to leave these problems alone, Linda is driven to investigate out of concern for Kelly. The discovery of two bodies produces devastating revelations for Linda and the close-knit community, but she never thinks of giving up her search for the painful truth.

Harrison, herself a member of the Church of Jesus Christ of Latter-day Saints, is known for her children’s fantasy books (The Rose Throne, 2013, etc.). This decidedly adult tale adds twists aplenty to an insider’s look at a religion replete with its own mysteries.