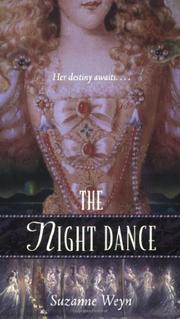 Weak writing ruins a nicely structured integration of Arthurian legend with a Grimm’s fairy tale. Rowena’s locked up with her 11 sisters because her father’s afraid that they’ll disappear like their mother, Vivienne, the Lady of the Lake. Each night they disappear underground, where dancing destroys their elegant slippers. Elsewhere, Sir Bedivere promises a dying King Arthur to return Excalibur to Vivienne. Bedivere and Rowena share reciprocal mystical visions in which they fall in love. The sisters’ nightly dancing, as well as their goal of finding their lost mother, leads to the same enchanted underground lake as Bedivere’s task of honor. Details of “Twelve Dancing Princesses” are skillfully woven in with the Camelot plot; however, the text is cluttered with modifiers, the narration is unsubtle and trite and the workings of magic are shallow. Instead, see Vivian Vande Velde’s Book of Mordred (July 2005) and Dia Calhoun’s Phoenix Dance (October 2005). (Fantasy. 10-12)