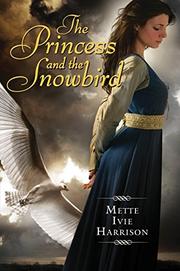 THE PRINCESS AND THE SNOWBIRD

Harrison’s two earlier titles, The Princess and the Hound (2007) and The Princess and the Bear (2009), were beautifully restrained tales of the magical ties between humans and animals, the fear of magic and the power of the forest. In this book, Liva, daughter of the Hound and the Bear, has inherited their powerful magic. She knows her parents mostly in animal form, and they keep her away from humans. Liva can transform into almost any animal at will, and she knows their languages and their secrets. But human magic and animal magic are at war, and a terrible stone can leach the magic and dissipate it. Jens, a man who has no magic, finds himself opposed to the campaign of a human Hunter who seeks to destroy all the animal magic, and he and Liva are drawn together powerfully. The author’s gift for delineating animal natures and human attraction is still evident, but this is a much less nuanced and structured story than its predecessors, with too much telling rather than showing and not enough depth or character development. The snowbird of the title plays a lovely but not entirely convincing role in a magical denouement. Each of these titles stands alone, but this one is less satisfying than the other two. (Fantasy. 12 & up)