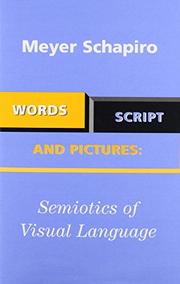 Two dogged essays (one not previously published) on the illustration of text and the appearance of script within images, by the late, seminal art historian. Focusing on images from late antiquity to the 18th century, ``Words and Pictures'' challenges the notion that illustrations were fixed mirrors for the stories they sought to elucidate. While an artist might not even read the story but rather copy an existing illustration of the passage, Schapiro points out that images were often altered due to the ``changes in meaning of a text'' and ``the changes in style of representation.'' Moreover, the terrain between the metaphorical and literal has always been fluid. To support his discussion, he dissects various biblical passages and their corresponding images to outline the shifting set of historical factors that lead to the production of any image. In ``Script in Pictures,'' Schapiro turns his attention to actual text, from signs of speech to the artist's signature, within the frame—the way script disrupts the picture's grid of perspective and how various artists have dealt with the issue. The device of inverting text for a viewer within the painting had been around for centuries but was used self-consciously by both Goya and Manet. Ultimately, text in the form of newspaper clippings appeared in Cubist paintings without any heed at all to perspective, and in our own era script became an ``object of art in itself'' in the work of conceptual artists. Schapiro's writing is focused and thorough but also broad- minded, and the concepts in these essays could easily be applied to the study of contemporary media, ranging from the news to feature films. (85 b&w illustrations, not seen)