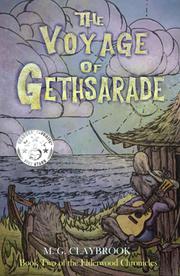 A squirrel embarks on a harrowing journey to find his destiny in this YA fantasy laden with anthropomorphic animals, the second book in the Elderwood Chronicles series.

When squirrel Lady Rodriga finds a baby squirrel adrift at sea, she raises him as her own. Before she dies, she tells Gethsarade that he has an ambiguous origin that involves the phrase “last of hopes.” Rodriga implores Gethsarade to find his destiny. He later makes a living by playing guitar, but after incensing a few animals, including the landlord he owes, Gethsarade flees and becomes a stowaway on a ship. Unfortunately, this ship is packed with rats known as pirats led by Capt. Barrogan Black. Adopting the name Vincent Poppaldi, Gethsarade befriends his onboard jail mates, Tiburt and Gy. After they manage to liberate themselves, the three ultimately seek the treasure of the City of Elorus, the same treasure Black wants. The rat captain’s crew follows them to the squirrel realm of Hesperia, but Gethsarade leads the locals in overwhelming the pirats. Now some believe that Gethsarade is destined to save them. As Capt. Black secretly hatches another plan, Gethsarade must decide if he’ll be the savior that others expect or if he’ll simply take the treasure and run. In Claybrook’s (The Miller and the Moon, 2019, etc.) deceptively straightforward story, there’s minimal plot development regarding characters’ destinations. But the animal characters are spirited and complex, particularly Gethsarade. Notwithstanding his eventual choice, he’s a prospective hero who, at least to some extent, is driven by greed. At the same time, backstory is engrossing. Readers first meet Gethsarade’s parents in a prologue that includes an introduction to the sinister Capt. Black. The story entails further, copious surprises, from what exactly the treasure is to a secret one of Gethsarade’s companions harbors. Though the young adult narrative is an easy read, the writing is crisp: “he had a hard set jaw, the kind only possessed by squirrels of high resolve, who needed no introduction or solicitation.”

Smart, ardent tale that will make readers want to revisit this series’ world.