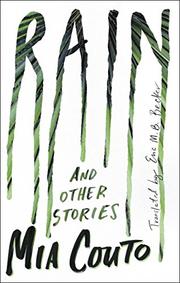 Stories about life in Mozambique after its civil war, reckoning with the damage via fable and folklore.

This collection by Couto (Woman of the Ashes, 2018, etc.) was first published in Portuguese in 1994, two years after the end of a 15-year war that killed or displaced 6 million people. So the mood is understandably somber, but Couto is not interested in dwelling on carnage; in his introduction, he writes that he wishes to explore instead “the space where violence could not strike, where barbarism could not enter.” That means the stories are more intimate tales of loss or of odd, Borges-ian incidents: A man is concerned that his pregnant wife’s long labor signals she’s cheated; the rain in the title story represents the end of the war years when “the gods reproached us with this drought”; a coconut reportedly spills blood instead of milk; a man turns his heavy drinking into an act of postwar religious meditation. All of the 26 stories are brief, usually running no more than five or six pages. And the plots are brush strokes, usually turning on themes of infidelity and the ways society has been upended after the war, be it through coping mechanisms (drinking and sex, usually) or more peculiar scenarios, as in “Beyond the River Bend,” in which a hippopotamus breaks into a vocational school and contents itself “chewing through a sewing machine.” Stylistically, Couto’s writing is poker-faced, neither rejecting nor outright embracing the more surrealistic events he describes, though he does enjoy wordplay: Translator Becker ably preserves Couto's affinity for neologisms with puns like “timidiminutive,” “mistified nights,” “intirrigated,” “airsfixiated.” Not every coinage works, nor does every story, but the prevailing effect is, to quote one of his portmanteaus, “splendolorous”: conveying a sense of profound loss flecked with a measure of optimism about life after the bloodshed is over.

An impressionistic flash-fiction trek through the wreckage of war.