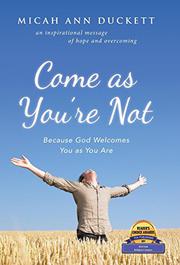 COME AS YOU'RE NOT

Because God Welcomes You as You Are

A debut Christian work encourages faith in the face of doubt.

Duckett begins this inspirational book with the story of her son getting hit by a car. The author was on her way home with supplies for the 9-year-old’s birthday party when she saw his mangled bike lying by the road. The boy had been mercifully thrown free of the wreckage, requiring stitches but sustaining no serious damage. According to Duckett, God spoke to her after the accident, directing her to Psalm 91:11-12: “For He will give His angels charge concerning you, to guard you in all your ways. They will bear you up in their hands, that you do not strike your foot against a stone.” God, the author believes, sent his angels to lift her son away from harm. But why her son and not the children of other parents? “It is impossible to find ‘because answers’ that make sense of the ‘why questions’....There are mysteries not meant to be solved, but God’s sovereignty is there to be found.” God does not always interfere in such direct ways, but Duckett encourages readers to open their minds and hearts to the intervention that God offers. Using events from her own life as a guide, the author explores the often unexpected means through which God makes his love known to humans, imperfect recipients that they are. Duckett is a strong writer, expressing her beliefs in a refined yet conversational prose that expresses her devotion with occasional flair. The way she roots her ideas in incidents from her own life keeps the work mostly compelling, though some readers may be incredulous at just how often God seems to intercede directly on her behalf. This is assuredly a work for a certain type of Christian audience, and anyone with a theological worldview much different from that of the author’s will likely be dissatisfied with its relative simplicity. That said, for books of this genre, Duckett’s is well-written and well-meaning, and like-minded Christians should find much in her story to inspire and invigorate their faith.

A polished volume of Christian spiritualism.