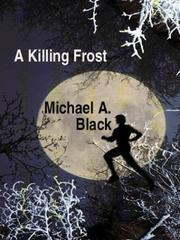 by Michael A. Black

Having lost his wife to overwork, his job with the Chicago Police Department to politics, his ancient car to natural causes, and his girlfriend to LA, private eye Ron Shade is about to give up his office—why keep it when he has no walk-in clients?—when his old friend, social worker Maria Castro, walks in. Her buddy Juanita’s fiancé, Carlos Sanchez, has disappeared from his job at Two Thousand and One: Space Oddities, and since he’s a Salvadoran illegal, Juanita doesn’t want to go to the police. By the end of Shade’s first visit to the storage facility, it’s pretty obvious what’s happened to Carlos and who’s responsible. But it takes a long time for Shade to trace the spreading stain of fraud, payoffs, and cover-ups as far as it reaches for several reasons: He’s busy training for the championship kickboxing fight an earlier job injury robbed him of; the theft of his spiffy new Camaro Z-28 robs him of his wheels just when he thinks he’s got nothing left to lose; the clunker he borrows as a replacement needs mechanical work every time he puts the key in the ignition; and his sudden, unexpected romance with Maria makes every hour he’s not spending with her feel like he’s playing hooky. It isn’t long, though, before he learns that fate held worse things in store for Carlos than deportation.

A brawny debut so foursquare in its characters and prose that you can hardly wait till Shade finally gets to put those kickboxing skills to use.