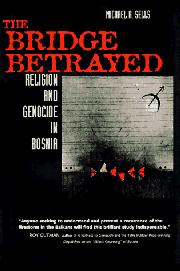 Religion and Genocide in Bosnia

by Michael A. Sells

A penetrating argument that the heady mix of religion and modern nationalism are at the heart of the Bosnian catastrophe. Sells is a professor of religion (Haverford Coll.) of Serbian descent. Here he joins these personal and professional interests, although he sides not with the Serbs but with the Bosnian Muslims. His book is both a condemnation of anti-Muslim religious stereotyping by Serbs and Croats, and an impassioned argument that the genocide in Bosnia is ``grounded in religious symbols.'' He is forthright in his accusations, charging that Western policymakers failed by denying Bosnia the right to self-defense and by neglecting their ``moral and legal duty'' to uphold the Geneva Convention's call for action against genocide. Sells is determined to debunk the popular misconception of ``ancient Balkan hatreds'' and to replace it with what he perceives to be the driving force of the war: explicitly modern, anti-Muslim religious and nationalist mythologies in which Muslims are represented as Christ killers and in which the Bosnians who long ago converted to Islam are seen as race traitors (because all Slavs, supposedly, should be Christian). However, while religion explains much in the former Yugoslavia, it does not explain all. Political, economic, historical, and social factors, though they're often overemphasized, have their place in an examination of Yugoslavia's collapse. Moreover, the war in Bosnia cannot be isolated from the larger conflict in the former Yugoslavia. And while Sells convincingly exposes the slander, falsehoods, and misinformation about Muslims that Serbs and Croats accept as true, he sheds no light on how and why they came to believe in these myths. Still, Sells's well-written, impassioned, and informed book represents a deepening of the ongoing discourse about the collapse of Yugoslavia.