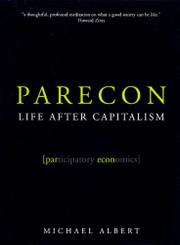 If not capitalism, what then? asks journalist and activist Albert as he proffers this dogged, humanist alternative to private enterprise.

Let's admit, suggests Albert (a founder of Z Magazine and South End Press), that capitalism has its downside: the zero-sum me-first logic, the downplaying of public good and prioritizing of private good, the decline of diversity as globalization swamps quality with quantity, not to mention antisocial investment, toxic individualism, ecological decay, and absurd income disparities. Albert rejects capitalism, but he also rejects the typical alternatives, such as market socialism and green bioregionalism; instead, he offers, in detail and with examples, participatory economics, or “parecon.” It's an ugly name for a surprisingly elegant economic system owned in equal part by all citizens. Those most affected have the most say in specific decisions. All jobs include “some rote work and some creative work” to eliminate disproportionate power and status. Within limits, pay reflects effort, “the only factor influencing performance over which an individual has any control.” The participatory planning process “utilizes cooperative communication of mutually informed preferences via a variety of simple communicative and organizing principles and means.” Albert’s design is remarkable for its applicability, for weighing social opportunity costs in pursuing a general equilibrium of allocation (“if we produce peanuts, how much of other things will we have to give up?”), and in its admission of imperfection and elements that will need special attention, like its busybody economics and its dictatorship of the sociable. Despite invocation of such romantic figures as Spanish anarchists and French communards, this is still the dismal science, complete with lots of repetition and phrases like “consumption calculated according to the IFB-generated indicative prices and adjusted for MLK's above-average collective consumption request.” But it’s also a science that could possibly generate widespread gratification in everyday economic life.

A historically informed and logical economic blueprint with the practicality of a hand-tool, and a vision guided by the desire to find nobility in work.