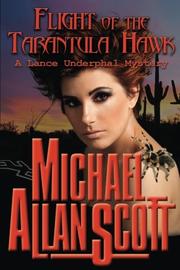 Flight of the Tarantula Hawk

Psychic crime-scene photographer Lance Underphal is back. In Scott’s (Dark Side of Sunset Pointe, 2013) latest thriller, this tortured character tries to use his visions to help police find a murderer who’s injecting victims with Botox.

When Lance is called to photograph the scene of a murder, a real estate agent killed by Botox shot into her neck, he realizes he’s already seen this in a vision—a wasp stinging a tarantula with a paralytic venom. Doing what he can to help his cop pal Detective Frank Salmon, Lance combs through his dreams, vague though they might be—the symbolic wasp and tarantula; a potential victim whom Lance can’t see clearly; a killer appearing as a child. Meanwhile, Lance, a tormented psychic plagued with insomnia and migraines, finds solace in hearing and conversing with the voice of his dead wife, Sonja. PI Jake Jacobs, a former SEAL who served with Frank, enters the investigation when he’s hired by Jenny, whose husband, Paul, disappears and is later found dead, also from Botox. Jake eventually locks on to a suspect, the senior vice president of a bank’s HR department, while the police have their eyes on someone else. Lance, meanwhile, provides details as they come to him, but he’s absolutely sure of one thing: The murderer is female. He just has to convince the cops he’s right. Alluding to his previous novel with mentions of “the Rodriguez case” but avoiding unnecessary elaboration, Scott can churn out visually rich passages with ease, particularly later in the story when the visions gradually reveal the killer and become increasingly disturbing. In particular, manifestations of the little girl eventually merge with the wasp and tarantula in a stunning, cringe-worthy scene. Lance is an intriguing protagonist, suffering from his psychic abilities with visions of a killer inside his head but also tortured by the simple fact that he still misses Sonja. Jake, however, ends up with the sauciest morsels: Already in a sexual relationship with Jenny’s mother, he picks up his female suspect at a bar on ladies’ night and later has to convince Jenny that he’s not holding out on her in the search for Paul’s killer. He has the best scene, too, when he tracks still-missing Paul’s phone to a foreclosed home and slowly approaches the door while on the phone with Jenny. However, the killer’s identity may not be a shock—readers will likely spot the link between the first two victims and wonder why the cops didn’t see it sooner.