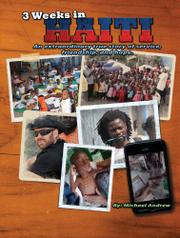 An Extraordinary True Story of Service, Friendship, and Hope
by Michael Andrew
BUY NOW FROM
AMAZON
GET WEEKLY BOOK RECOMMENDATIONS:

In his straightforward prose, Andrew insightfully compares the conundrum of modern disaster response to the physics of large wheels and small wheels: “A large wheel [aid organization], due to its size and inertia, cannot accelerate as quickly as a small one.” Without experience or training, Andrew, a photography teacher, goes to Haiti to help get the wheels turning. In bite-size, easy to digest chapters, he offers an inside look at large-scale emergency responses, including a look at the “Disaster Tourist”—those well-intentioned but burdensome thrill-seekers who venture to disaster areas with no means of sustaining themselves, let alone others. While emergency supplies are tied up in depots, tech savvy Andrew uses his iPhone to map GPS coordinates of local orphanages and, with his Haitian-American friend Mathieu, finds creative ways of obtaining and delivering food, water filtration systems and routes to deliver diapers via Tap Tap (rickety Haitian taxis). Unfortunately, Andrew lingers on the logistics of his adventure, such as the difficulties of charging his cellphone, while barely touching on his personal impressions of post-quake Haiti. In his first drive through leveled Port-au-Prince, he briefly compares the city to Mogadishu in the movie Black Hawk Down; this metaphorical mode of description keeps the reader at a remove, rather than walking beside Andrew through what is documented to have been utter chaos and destruction. Andrew mostly fails to describe the traumatized Haitian people, instead making broad statements that create a feeling of us versus them. “Many Haitians know that they can make more money begging and scamming than they can by honest hard work,” he writes without providing much evidence. His account stays on the surface: “orphans” remain a concept, “aid” is a nicety and Andrew, as a character in this memoir, is a good guy, rather than the remarkably brave man who traveled to an unfamiliar country to help the devastated people rebuild and survive.

Andrew’s intentions are beyond reproach, but his tendency to preach his lessons learned without allowing readers to experience the learning alongside him makes the memoir less effective and memorable than if he were to detail in more depth the recovery he helped advance.

THE BIG TRUCK THAT WENT BY
by Jonathan M. Katz
Indie

WE FED AN ISLAND
by José Andrés
Fiction