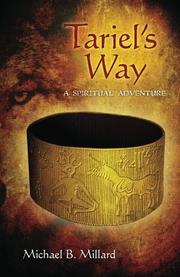 by Michael B. Millard

Millard’s earnest novel offers a carefully researched tour of Bronze Age religions through the eyes of Tariel, a wanderer who is skeptical and searching.

During his initiation ceremony, 15-year-old Tariel undergoes a painful, unsettling experience. Expecting to find his place in the village, he instead finds he must leave home altogether—on the run for his life. His travels take him from the Caucasus Mountains down the Euphrates, along the Persian Gulf, into India and even to the mythical kingdom of Shambala in Tibet. As he tries to earn a living over the years (including stints as a rent collector and a pirate), he also searches for spiritual truths from the teachers, priests, shamans and gurus he meets along the way, braced by his natural skepticism. (When the god Marduk is credited with helpful intervention in a battle, Tariel comments, “None of this made much sense to me, since all my life, I had seen that talent and practice make a good archer.”) By the end, he comes to understand the meaning of his adventures in and out of the spirit world. Debut novelist Millard (Adjunct Lecturer in English, SUNY Geneseo) has clearly done his homework, and the reader can learn much about the state of Bronze Age religions and cultures in the Near East and India. The details can be fascinating. Sometimes, though, it feels like homework, when each new set of beliefs that Tariel encounters is dutifully described. As an adventure novel, the book too often has the plodding, clunky feel of an official report: “The Arch Pirate questioned the man intently about the gold shipments and had other crew members brought forward to provide additional information.” Or this, from an action scene: “Since the river was wide…we were still out of range. In contrast, my bow from Mardaman was larger and more powerful.” When Millard employs a lighter touch, as with the grumpy wise man Ashapa or the pleasure-loving prince Nala, the journey is more enjoyable. An informative travelogue of Bronze Age cultures and beliefs that could benefit from a more seamless blending of facts and fiction.