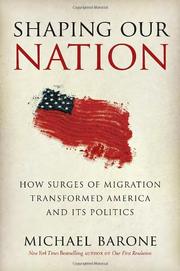 How Surges of Migration Transformed America and Its Politics

The Washington Examiner’s senior political analyst examines the internal and immigrant migrations that have “peopled” America.

Few commentators have studied the history of American politics as thoroughly as Barone (Our First Revolution: The Remarkable British Upheaval that Inspired America’s Founding Fathers, 2007, etc.), and he continues his life project here with a look at our constantly churning population, mass movements that have had a continuing effect on our politics. Picking up about where David Hackett Fischer’s estimable Albion’s Seed (1989) left off, Barone looks first at the antebellum spread of the Scots-Irish from the Eastern Seaboard to the Southeast and Southwest. He turns then to four other epochal surges: the first half of the 19th-century migration of New Englanders across upstate New York and the Midwest and of planter-class Southerners from the coast to the Mississippi Valley; the 1840-1890s immigrations of Irish Catholics and German Protestants; the mass movement from rural to urban America from the end of the Civil War to World War II; and the 1970-2010 immigration of Latin Americans and Asians to major American cities. Within these larger transformations, Barone pursues a variety of intriguing subplots—Andrew Jackson as the perfect embodiment of the American Scots-Irish, the unique, “annealing effect” of WWII, the role of air conditioning in repopulating the South, and the recent exodus from high- to low-tax states—and he emphasizes two recurring themes: the unanticipated beginnings and the rather abrupt endings of these mass migrations and the widespread unease, even fear, each development engendered. How could the republic possibly absorb these changes? Barone ably demonstrates how practiced the United States has become, how sturdy our constitutional framework has proven, at accommodating the religious, economic and cultural diversities that accompany vast, unexpected additions to and shifts within our population.