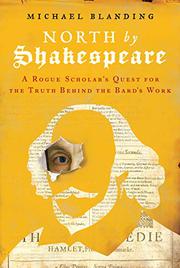 A Rogue Scholar's Quest for the Truth Behind the Bard's Work

In this investigative follow-up to The Map Thief (2014), journalist Blanding dives into the ongoing debates over the authorship of Shakespeare’s plays with a lively profile of freelance writer Dennis McCarthy, who has mounted considerable evidence that Shakespeare drew heavily on the works of English translator, lawyer, diplomat, and writer Thomas North (1535-1604). The son of Edward North, a prominent courtier who rose in stature and wealth during the reigns of Henry VIII, his daughter Mary, and finally Elizabeth, Thomas kept a detailed journal during travels with his father and enjoyed a privileged view of aristocracy. With McCarthy, Blanding traced Thomas’ footsteps in England, France, and Italy, research that informs his brisk recounting of North’s life and turbulent times. Unlike some who claim that another person—Francis Bacon, perhaps, or Edward de Vere, the Earl of Oxford—was the real author of Shakespeare’s plays; and unlike others who argue that Shakespeare likely collaborated with multiple co-writers, McCarthy told Blanding that “he believed the Bard of Avon wrote every word attributed to him during his lifetime.” He also believed, however, that Shakespeare—who never traveled in Europe and had no connection to court life—needed to rely on sources. Even Mark Twain questioned how Shakespeare “mastered the nuances of a lawyer, a courtier, and a soldier” without experiencing those roles. While scholars agree that historical chronicles by Holinshed and Hall provided much material, McCarthy claims that Shakespeare lifted plots, characters, and even phrasing from North. Using plagiarism detection software and referring to the huge database Early English Books Online, McCarthy has concluded that correspondences between Shakespeare and North are indisputable. Not surprisingly, McCarthy’s arguments have not been welcomed by Shakespearean scholars; too many, he asserts, are invested in the image of Shakespeare as a solitary genius. Readers who peruse his lengthy appendix, offering parallel excerpts from North and Shakespeare, can come to their own conclusions.

An entertaining look at a literary iconoclast.