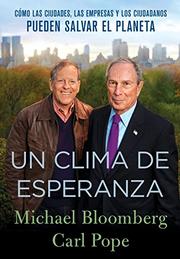 How Cities, Businesses, and Citizens Can Save the Planet

Just in time for Earth Day, yes, a hopeful book of strategies for delivering the planet from our worst environmental depredations.

“Cities and nations thrive when leaders anticipate the future—and dream big,” writes former New York mayor and media magnate Bloomberg, who partners with former Sierra Club chairman Pope in alternating chapters. In a time when national leadership seems bent on denying the facts of climate change and failing to plan for the likely consequences of it, the authors propose that smaller-scale efforts are more likely to produce the desired results, efforts that “empower cities, regions, businesses, and citizens to accelerate the progress they are already making on their own.” For instance, Pope—who seems, on the whole, wonkier than Bloomberg—looks at ways in which electrical utilities can lead the way in shifting to renewable sources of power as opposed to being forced into it, one measurable result of which has been bad blood in coal country as a result of the Obama administration’s headlong plunge into cleaning up the coal industry without making necessary provisions for the workers who would be left jobless. Which isn’t to say that Bloomberg isn’t without his techno-nerdy side: he writes assuredly of the many ways in which cities such as New York have re-envisioned the role of the automobile, though with a political slogan or two tucked inside his prose for good measure: “more city leaders are recognizing that when the interests of cars and people diverge, people should come first.” Elsewhere, Bloomberg looks into the role of buildings in climate change—they are, as he notes, responsible for some 70 percent of greenhouse gas emissions—while Pope notes that the future of climate change is not yet written, though sticking to a reasonable and salutary regime of energy consumption will “take decades to be felt.”

Whether this is an exercise in thinking globally and acting locally or vice versa, a thoughtful, eminently reasonable set of proposals for saving New York—and therefore the world.