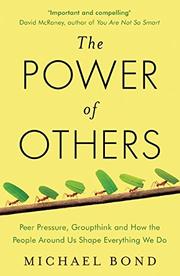 THE POWER OF OTHERS

Peer Pressure, Groupthink, and How the People Around Us Shape Everything We Do

London-based writer Bond wades into the murky reaches of the human psyche in this exploration of how other people’s opinions shape our behaviors and attitudes.

Combining decades of experimental research by social scientists with summaries of historical events, the author presents an analysis of how peer pressure, groupthink, heroism, evil, extreme environments and isolation all affect our actions. Bond begins by explaining why it is natural for humans to want to be part of a group. He goes on to define social mimicry and looks at how this mirroring of body language, and even moods, “helps us understand other people’s minds.” The author notes the importance of caution and protecting yourself when making decisions in today’s wired environment, with its vivid imagery and continuous “information cascade.” Bond also discusses how group dynamics and perceptions affect those individuals who are perceived as the “Other,” especially during times of stress or threat to the in-group, such as the months and years following 9/11. The author cites research exploding the theory of the madness of the mob, and he relates how this idea has been employed throughout history for political ends. Bond chronicles how authority, peer pressure and the environment can combine in dreadful ways, producing truly evil behavior such as that of Adolf Eichmann during World War II. The author recounts the shocking results obtained by Stanley Milgram during his infamous experiments conducted at Yale University during the 1960s, illustrating how important context is to how people behave. Bond devotes the concluding portion of the narrative to understanding human behaviors during and after prolonged solitary confinement or an extended solo stretch in a harsh environment such as the Arctic. “We can learn as much by looking at what happens to us when others are not there,” he writes, “when we are forced to get by on our own.”