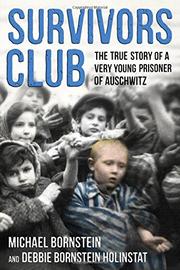 The True Story of a Very Young Prisoner of Auschwitz

Michael was only 4 when he miraculously survived the liberation of Auschwitz in January 1945.

Filmed by Soviets liberating the camp, he saw his image years later, but he was not ready to tell his story until he saw his picture on a Holocaust-denial website. He enlisted his daughter, a TV journalist, to help him uncover further information and to co-author this book. In the preface, Holinstat writes: “we tried to keep the book as honest as possible. While the underlying events are entirely factual, there is fiction here.” The father-daughter pair found documents, diaries, and survivors’ essays to supplement the limited memories of a very young child, and they write about this process in the preface. The first-person narrative begins with the events of September 1939, even though Michael was not born until May 1940, which feels artificial. Horrific as the experience was, the Auschwitz chapters are just part of Michael’s journey. Living in an open “ghetto” in his hometown, moving to a forced-labor camp, then to the extermination camp where his older brother and father die, returning home where Jews are not welcomed, and then living in Munich as a displaced person for six years until he can emigrate to the United States with his mother, the chronicle of Bornstein’s first 11 years parallels the experiences of many other surviving victims of the Final Solution.

In today’s world, it remains more important than ever to remember these survivors.