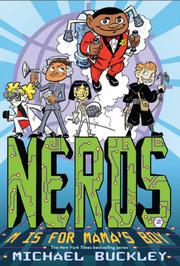 M IS FOR MAMA'S BOY

From the NERDS series, volume 2

Turncoat former member of National Espionage Rescue & Defense Society (aka NERDS) Simon (once known as “Choppers”), who can hypnotize with his enormous buckteeth, craves revenge against his erstwhile teammates, enhanced fifth graders whose weaknesses have become superstrengths. Simon recruits Albert Nesbit, a 37-year-old mama’s boy and computer genius, to create a machine that will control all computers. When Albert zaps the NERDS team, the nanobytes in their bodies that give them their superskills go haywire. Most members rely on their training to continue their spy work, but Duncan “Gluestick” Dewey is in crisis (and requires several “man up” talks from various bosses and cohorts). Can the NERDS (especially Duncan) save the world by defeating Simon, Albert and, most frightening of all, Albert’s overprotective mother? Peppered with lessons on cracking codes, ciphers and invisible ink, the second adventure in Buckley’s silly spy-kids spoof is as frenetically goofy as the first. Beaver’s illustrations and Chad W. Beckerman’s art direction make for a terrific package for reluctant readers or book lovers out for thrills, gadgets and larfs. (Adventure. 8-12)