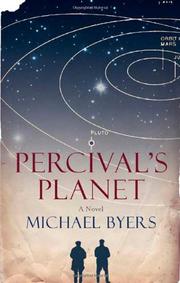 A closely observed saga of scientific discovery—but with stolen kisses, madness and plenty of other complications.

Percival Lowell, one of the many real-life characters in Byers’s (Long for This World, 2003, etc.) novel, is a man obsessed by many things: Martian canals, alien species, undiscovered planets lurking at the edges of the solar system. But, as Byers slyly observes, he “was not the only wild-eyed schemer that Arizona ever attracted; indeed, now in the summer of 1928, it can seem as though something in the desert air is drawing them by the carload.” Some are wealthy, including chemical-fortune heir Felix DuPrie, an amateur paleontologist who helps revise the fossil record—and names a dinosaur species after a woman inconveniently married to someone else. That someone else, meanwhile, names a comet after a woman inconveniently married to yet someone else. While Byers’s tale is generally family-rated, there is plenty of unrequited and rather desperate love to go around. Farm boy Clyde Tombaugh wanders into the pulsing scientific scene as if a less privileged Nick Carraway among the West Egg set and finds himself vying with the best minds Harvard can produce to find the planet Lowell so desperately seeks. Everyone in Byers’s pages is searching for something, whether far away or underneath the dirt—and no one, it seems, is quite content with what he or she has, except, perhaps, for DuPrie’s hardworking crew of Italian immigrants. Much is at stake, and as Byers’s players peer into the reaches of the universe, hearts break and minds snap. This would all be high-order romance were Byers not such a careful writer and, as it happens, so faithful a historian, and he turns in some lovely lines, among them this one: “The mind travels out into the landscape and, finding nothing, returns with the sense that something really is in residence there: something huge, silent, eternal.” Just so.

A fine study in the psychology of yearning, elegantly told.