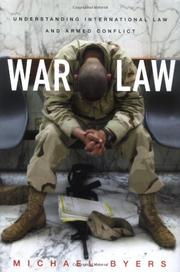 If Britain suspected that a Boston bar harbored IRA terrorists, would it be justified in lobbing cruise missiles into the city? Canadian legal scholar Byers doesn’t raise the question, but he achieves plenty of similar provocations in this lucid primer.

International law is, of course, what keeps the nations of the world from mauling one another worse than they do already; as Harry Truman remarked at the conference that established the United Nations, “We all have to recognize—no matter how great our strength—that we must deny ourselves the license to do always as we please.” Yet, as Byers demonstrates, laws have a way of stirring up special pleading in the hope of granting exceptions; laws are constantly redefined; and rogue nations are forever testing the limits of the law, sometimes branching off on their own to pursue unilateral courses of action in places like, say, Iraq. A strict adherence to the letter of the law can yield disaster, of course, as Byers notes in the instance of Rwanda; while the “paradigm shift” that redefined genocide and led to the creation of the International Criminal Court came too late to save 800,000 Tutsis, it doubtless spared the lives of innocents in Kosovo. Yet, Byers notes, it is important to follow procedure, as Australia did in East Timor and the U.S. did in the first (but not the second) Gulf War, in order to secure international legitimacy. He goes on to examine several instances in which real events—the hijacking of an Air France jet to Uganda in 1976, the Pakistani invasion of Bengal in 1971, Saddam Hussein’s attempt to crush the Kurds in 1994—led to important reevaluations of the law, some with perhaps unintended consequences. For instance, Slobodan Milosevic now sits before an international tribunal—but could not Ariel Sharon (and, for that matter, Henry Kissinger) be tried for the same category of crime?

A thoughtful introduction to a complex, often baffling subject.