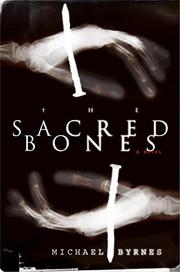 Brigands in the employ of the Vatican swipe a fancy stone box from a secret chamber under the holiest and most fought-over spot in Jerusalem. Guess whose 2,000-year-old bones are in the box?

There is, apparently, no end to the demand for tales of treachery and centuries-long deceit on the part of the Catholic Church, where there is, it seems, nothing going on these days but treachery and, yes, deceit. Debut novelist Byrnes’s entry pits Vatican heavies against relatively noble Muslims and the usual unscrupulous but dazzlingly effective Jews, when mercenaries hired by the Pope’s Secretary of State, Cardinal Santelli, use a hijacked Israeli army helicopter to spirit away the most elaborate of nine ossuaries hidden centuries ago by the Knights Templar just prior to their elimination by the French King and his evil papal ally. Cardinal Santelli has appointed Father Donovan, the Vatican librarian, to see whose bones are in the box, and Donovan has in turn employed Charlotte Hennessy, a beautiful American scientist secretly dying of bone cancer, and Giovanni Bersei, an Italian married to Italy’s only Bad Cook, to do the scientific testing. As the scientists run their tests in Rome, back in the Holy Land the Muslims and Jews point fingers, knives and guns at each other over the loss of the box, and stumble over each other trying to find who took it. Graham Barton, a scholar hired by the Israelis to identify the remaining evidence in the secret chamber, is the only religiously neutral player. He’s quick to identify the remains as belonging to the family of Joseph of Arimathea, the wealthy Jew who offered his own tomb as a burial site for Jesus after the crucifixion. In Vatican City, the scientists use powerful software to reconstruct the body that went with the bones. Gee! He’s extremely good-looking. And buff. Holy cow.