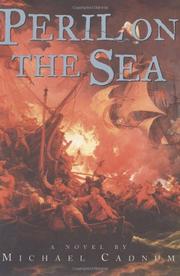 PERIL ON THE SEA

With one of the greatest naval battles of history looming in the background, 17-year-old Sherwin Morris is saved from a sinking ship and hauled aboard Brandon Fletcher’s Vixen, where he agrees to write the narratives of Fletcher’s piratical adventures and thereby bolster the sea captain’s reputation. Fletcher has made a career of robbing any ship on the sea—Arab, Dutch, Spanish and even fellow English ships—and he’s as notorious as Drake, Hawkins and Frobisher. When 16-year-old Katharine Westing comes aboard, having worked out a deal to save her family’s name and fortune, the ship takes on a “courtly quality,” as Sherwin and Katharine’s romance offers a counterpoint to bloody sea battles and the menace of the Spanish Armada. Cadnum’s prose is vivid and evocative, brilliantly re-creating life at sea in the Elizabethan era. From the opening scene, when Sherwin’s Patience sinks, to intrigues on land and sea, to engagement with the 100-ship Armada, the tale is expertly paced, the varied threads of the tale elegantly woven. There’s plenty here to appeal to a wide audience. (preface) (Historical fiction. 11 & up)