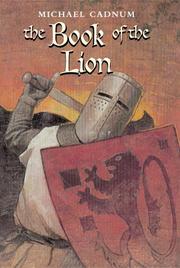 THE BOOK OF THE LION

Cadnum revisits the medieval setting of In a Dark Wood (1998) for this tale of a young squire’s experiences in the first crusade, but once again, his storytelling lacks conviction. Having seen his master’s arm struck off at the order of the Sheriff of Nottingham, strapping apprentice Edmund is saved from the same fate by Nigel and Rannulf, two knights preparing to follow King Richard to the Holy Land. It’s a long, grubby journey, from London to Venice, thence to the siege of Acre, and the subsequent battle of Arsuf, replete with mud, blood, filth, disease, violence, rough humor, moments of beauty, and even fugitive kindness. Edmund views his world, and his own acts, with a detachment that robs his narrative of immediacy, particularly at climactic moments. In the end, he gets a glimpse of Jerusalem, then accompanies Nigel, whose arms have been crushed, back to England. Cadnum builds on a sturdy historical framework, and the naturalistic detail adds plenty of color, but few readers will be truly caught up in Edmund’s adventure. The author’s confessed bafflement over “caring, responsible” adults behaving with such brutality seeps into the story, making it emotionally inaccessible. (Fiction. 12-15)