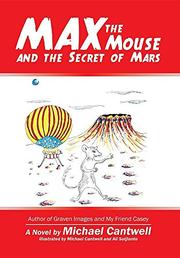 MAX THE MOUSE AND THE SECRET OF MARS

A mouse named Max has an owner, Melissa, who treats him kindly and trains him well, and in time, he becomes quite intelligent. But one day, his curiosity gets the best of him, and he escapes through the backyard fence and becomes lost in the city. He finds a group of friendly mice and soon becomes their leader, first directing them out of the dangerous city into the forest and then from the dangerous forest to Mars by balloon. But although the environment of the great red planet seems conducive to their survival, its inhabitants, unfortunately, are not. Robotic mice immediately take Max and his friends captive, and the mechanical royal family sentences them to be executed. The pretentious Princess Bling Bling, however, takes a liking to Max, and after sharing with him the history of her people on Mars, she offers to keep him alive—as her pet. But Max, concerned about his friends, tries to find a way to save them and escape the clutches of the dangerous Mars mice. The book teaches kids about the importance of caring for the environment and the danger of letting technology run one’s life. This is mainly shown through the history of the robotic mice; they were preceded by the Monkey People (symbolic of humans), who were destroyed by laziness and environmental abuse, and the Computer People (symbolic of technology), who eventually destroyed one another. The book also features unique, lovable characters and a quirky sense of humor; adults will get a kick out of Senator Blabbermouth, who keeps a hot air balloon afloat with rambling speeches full of “hot air”: “I promise you free cheese, chocolates for dessert, no taxes...blah, blah, blah.” The book also provides a secondary story about Melissa that’s brilliantly woven throughout Max’s tale. The charming illustrations effectively highlight major events and match the text’s silly tone.