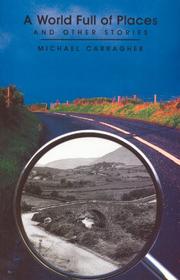 A WORLD FULL OF PLACES

A first collection of 13 skillfully written but occasionally repetitive stories by an Irish-born American writer who presently teaches at the University of Arkansas. The world of Carragher's fiction is an overwhelmingly masculine one. Many of his characters seek tests of their manhood at crossroads where sexual, and sometimes political, choices must be made. At their weakest, his stories resemble warmed-over Hemingway (``Mud and Sand'') or present overfamiliar images of rural Irish poverty and family conflict (``Women and Men,'' ``Unconsecrated Ground''). But several have a gritty particularity (``The Stump and the Sapling'' and ``Coward'' are notably vigorous), and Carragher memorably depicts contrasts between boys who romanticize violence and warfare and men who endure them, in settings ranging from 19th-century scenes to contemporary envisionings of religious sectarianism and discord. Interestingly, the atypical ``Strange Sounds from a Far-Off Land'' records the surreal experience of a henpecked Americanized ``peasant from the bogs of Ireland'' who, hearing a banshee's wail, senses his father's approaching death, and finds that the loss he'll suffer isn't the one he expects. It's Carragher's best story.