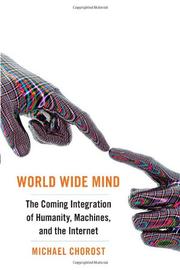 The Coming Integration of Humans and Machines

An adroit overview of the progress in joining together computers and humans.

In his first book, Rebuilt: How Becoming Part Computer Made Me More Human (2006), science writer Chorost described his experience with the first practical human-computer interface. After he became deaf in 2001, a surgeon inserted cochlear implants into his skull. He stresses that these are not simple amplifiers but computers that send digitized sound signals from tiny external antennas directly to his auditory nerve. This requires active cooperation from his brain because months passed before he learned to interpret the resulting electronic gibberish as English speech. Chorost explains how we communicate and interviews scientists who are teasing out the brain’s mechanism for memory, perception and behavior and studying how to influence them. They are already altering cellular behavior by inserting specific DNA into their nuclei with modified viruses; one alteration allows light from a small diode to stimulate or inhibit the cell’s activity. The author points out that, beyond speech, humans communicate with each other through smell, touch, heat and electricity. We’ve already taken the first step in building computers that do the same. A smartphone touch screen requires a living interface, ignoring a stylus but responding to a finger or even a cat’s paw. Unlike the Internet, which isolates individuals, instant communication, perhaps through small implanted microchips, will empower us to intelligent collective activity similar to taking part in a symphony.

Using the analogy that a violinist contributes to an orchestra without diminishing herself, Chorost makes a stimulating case that implanted computers might propel humans to the next step in evolution.