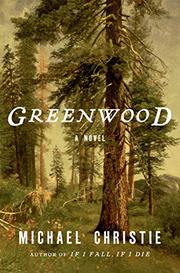 Canadian novelist Christie (If I Fall, If I Die, 2015, etc.) takes us to the end of the world and shows how we got there.

“No one knows better than a dendrologist that it’s the forests that matter.” It’s 2038, and Jacinda “Jake” Greenwood is a guide in one of the last stands of old-growth forest in the world, a place to which wealthy eco-tourists, fleeing the dust storms and intense heat wrought by “the Great Withering” elsewhere, come to spend a few days in a tiny patch of green. One visitor, a former fiance named Silas, informs Jake, long an orphan, that she’s more than just an employee: The whole shebang belongs to her, and not just because she bears the same name as the Greenwood Arboreal Cathedral to which those well-heeled pilgrims flock. No, it’s because she descends not from the Greenwoods but from a founder of the all-encompassing Holtcorp, owner of Greenwood and much else, by way of her grandmother Willow. (Note all the woody names.) Therein hangs a tale that Christie staircases his narrative down to reach, generation by generation, one in which Jake's antecedents love and admire the forests in which they dwell but still set into motion the machines that will one day ruin the Earth. Willow is a free-spirited hippie whom we meet in the early 1970s, newly indignant to discover that the man she supposes is her father has derived his considerable fortune from having felled more old-growth forest than “wind, woodpeckers, and God—put together.” But Willow—well, suffice it to say that the matter of her paternity isn’t at all clear-cut even if the forests her progenitors control have been. Christie skillfully teases out the details in a page-turner of a saga that complements sylvan books such as Sometimes a Great Notion and The Overstory, one that closes with Jake’s realization that, tangled lineage and all, a family is less a tree than “a collection of individuals pooling their resources through intertwined roots.”

Beguilingly structured, elegantly written: eco-apocalyptic but with hope that somehow we’ll make it.