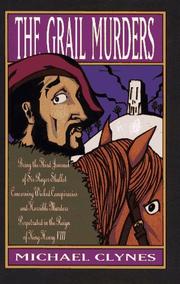 A third helping of braggadocio from the pen of rascally old courtier and raconteur Sir Roger Shallot (The White Rose Murders, 1993, etc.). This time, the plot is kicked off by Henry VIII's execution of the Duke of Buckingham on suspicion of seeking (and finding?) the twin treasures of King Arthur's sword, Excalibur, and the Holy Grail. The king wants the priceless relics for himself to strengthen his dynastic claims against the house of York; so does Cardinal Thomas Wolsey's Machiavellian prince of spies, Sir Edmund Mandeville; so (it's rumored) do the surviving underground remnants of the outlawed Knights Templar. When Wolsey packs his nephew Benjamin Daunbey, Shallot's master, off to Buckingham's manor at Templecombe, he starts a treasure hunt (fueled by the doggerel clue, ``Beneath Jordan's water Christ's cup does rest,/And above Moses' Ark the sword that's best'') that's also a race against a killer who's dispatching the searchers on a grand scale. There's murder by garroting, by runaway horse, by burning bed in locked room—seven homicides in all, not to mention miscellaneous deaths by trumped-up duels and executions. Yet the whole affair is oddly dispirited, enlivened only by Shallot's endless drip, drip, drip of self-aggrandizing anecdotes and citations of the great lines he gave his buddy Will Shakespeare. Shallot, who's clearly meant to be irresistible but is actually as tiresomely gassy as a congressional subcommittee, takes all the momentum out of a narrative that could have been whimsically or mystically effective in firmer hands.