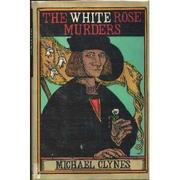 A third historical series from the author who, as P.C. Doherty, created scholar-rogue Matthew Janklyn and the clerk-spy Hugh Corbett now introduces Sir Roger Shallot, in his dotage and recounting his past exploits—some wily, others lecherous, most dishonest. Here, Shallot and his old school-chum/protector Ben are asked to interrogate Selkirk, now imprisoned in the Tower, and discover information vital to the return of Queen Margaret to Scotland. But Selkirk is soon murdered in his locked-from-the- inside cell (with a white rose mysteriously appearing by his side), and three more will die before Shallot—assassins dogging him both in England and in France as he learns of various treacheries, conspiracies, marital infidelities—can untangle the English, French, and Scottish line of successions. Shallot's bluster (he claims to have bedded Elizabeth I, offered plot ideas to Shakespeare, etc.) seems more force-fed ``history'' than genuine characterization, and these asides, always cut short by ``that's another story,'' become extremely irritating. Atogether, then, Shallot is far less interesting than that scamp Janklyn and medieval mole Corbett.