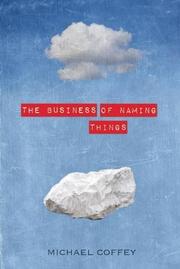 THE BUSINESS OF NAMING THINGS

A clutch of well-crafted stories, thick with literary references, that turn on busted relationships between men and women and fathers and sons.

Harold Brodkey, James Joyce, J.F. Powers, Henrik Ibsen—each of these writers finds his way into the eight stories in this first work of fiction by Coffey (Days of Infamy, 1999, etc.). The name-checked authors hint at some of Coffey’s chief concerns—masculinity and faith most prominently—as well as his approach to style. “Inn of the Nations” centers on a priest who’s lost his passion for his calling and pursues an affair with a nun; set shortly after the JFK assassination, the brief story describes how “he’d become hardened to his own sin” but is without religious sanctimony. The broader “Sons” pursues a similar theme, following an alcoholic poet as he worries that his son is complicit in a calamity that makes national news; in Coffey’s hands, the man’s drunken fog reveals his self-loathing even while he busily labors to obscure it. This collection's stories are carefully chiseled, and the prose is sometimes stiff, but Coffey will occasionally cut loose, as in the closing “Finishing Ulysses,” which follows a professor eager to teach Joyce’s classic who’s out on the town in Philadelphia. Though short, the story has an appealingly jazzy, impressionistic, stream-of-consciousness rhythm. (“Smokes you need and why not the bennies. Some jump. Setting sun crashing into the façade of the church over there.”) Most of these stories capture men in decline, but one of the collection’s best is more tender: In “The Newman Boys,” the narrator recalls his brief childhood acquaintance with a neighbor boy diagnosed with hydrocephaly; the story captures the narrator’s narcissism, fears, confusions about adulthood—and, in its closing pages, a sense of how small kindnesses can resonate across decades.

Sober and smart writing that evokes the more mannered American stylists of the 1960s and '70s.