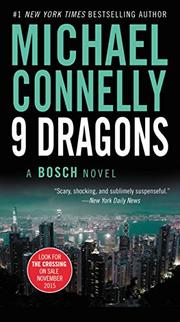 An apparently everyday murder in South Los Angeles takes Harry Bosch (The Brass Verdict, 2008, etc.) further and deeper than a case has ever sent him before.

Ordinarily the members of LAPD Robbery-Homicide’s Special Homicides squad wouldn’t touch a case as routine as the shooting of John Li. The elderly owner of Fortune Fine Foods and Liquors has been shot three times, presumably by the same person or persons who emptied his cash register and the surveillance video. Telltale clues and the testimony of Li’s frightened family members, however, suggest that their patriarch may have been executed by triad members when he refused to continue paying for protection. Unlike Ignacio Ferras, still spooked by the bullet he took for his partner, Bosch quickly gets his teeth into the case. But no sooner has he gathered enough evidence to arrest triad bagman Bo-Jing Chang than he’s threatened with unspecified evils if he doesn’t take off the heat. These evils swiftly assume malevolent shape when Bosch gets word that his daughter Madeline, half a world away in Hong Kong, has been kidnapped. Dropping everything to rescue the 13-year-old he’s known for only a few years, he flies to Hong Kong and embarks on a bravura sequence of action set-pieces evidently crafted with both eyes on the movies. (“Oliver Stone will direct it!” Lincoln Lawyer Mickey Haller exults.) Nine corpses later, Bosch is back in the United States with Madeline. He has to get her settled and deal with her traumatic memories; he has to face the Hong Kong police, who think for some reason that he’s a cowboy run amok; and of course he has to solve his case. After the exoticism and high intensity of his Far East adventures, however, these anticlimactic problems are resolved with suspicious facility.

A short-story–sized mystery exploded by the triple-sized dose of vigilante justice Bosch gets to dispense as cop and father.