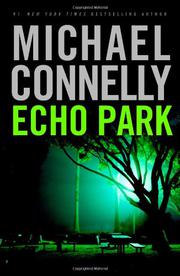 Harry Bosch, back with the LAPD in the Open-Unresolved Unit (The Closers, 2005), wrestles with a teasing case from his salad days in Hollywood homicide.

Back in 1993, equestrienne Marie Gesto vanished without a trace. Ten days later, her car turned up in the garage of a landmark apartment building, her clothing neatly folded inside. Then nothing, from that day to this. Harry Bosch, who caught the case, worked it obsessively and even took a copy of the open file into retirement with him. Frustrated that he could never make a case against Anthony Garland, the worthless son of a high-rolling oilman, Bosch reviewed the evidence every chance he had when he was back on the job in Open-Unresolved. Now, suddenly, the crime has evidently been solved without his lifting a finger. Raynard Waits, a window-cleaner caught red-handed with the dismembered body parts of two murder victims in his car, is trying to avoid the needle by confessing to nine earlier homicides, including Marie Gesto’s. But Harry can’t help looking this gift horse in the mouth. He doesn’t trust Freddy Olivas, the Northeast homicide detective in charge of the case, or Rick O’Shea, the prosecutor who plans to ride it into the top job at the DA’s office. And he doesn’t trust Waits, not even when he provides information about the crime only the killer could know and offers to lead the cops to the spot where he buried Marie Gesto. Readers who feel confident they can see what’s coming will be thrown off-stride by the crafty series of surprises Connelly has up his sleeve. But nobody familiar with Bosch’s checkered career will be shocked when the malfeasance reaches past Raynard Waits to the highest levels of city government.

Connelly offers a stellar demonstration of why, as Harry says, “taking it straight to the heart is the way of the true detective,” whatever the costs to himself and others.