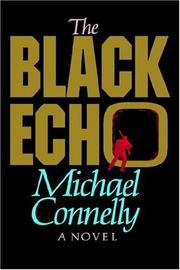 Big, brooding debut police thriller by Los Angeles Times crime-reporter Connelly, whose labyrinthine tale of a cop tracking vicious bank-robbers sparks and smolders but never quite catches fire. Connelly shows off his deep knowledge of cop procedure right away, expertly detailing the painstaking examination by LAPD homicide detective Hieronymus (Harry) Bosch of the death-scene of sometime junkie Billy Meadows, whom Bosch knew as a fellow "tunnel rat" in Vietnam and who's now o.d.'d in an abandoned water tunnel. Pushing Meadows's death as murder while his colleagues see it as accidental, Bosch, already a black sheep for his vigilante-like ways, further alienates police brass and is soon shadowed by two nastily clownish Internal Affairs cops wherever he goes—even to FBI headquarters, which Bosch storms after he learns that the Bureau had investigated him for a tunnel-engineered bank robbery that Meadows is implicated in. Assigned to work with beautiful, blond FBI agent Eleanor Wish, who soon shares his bed in an edgy alliance, Bosch comes to suspect that the robbers killed Meadows because the vet pawned some of the loot, and that their subsequent killing of the only witness to the Meadows slaying points to a turned cop. But who? Before Bosch can find out, a trace on the bank-robbery victims points him toward a fortune in smuggled diamonds and the likelihood of a second heist—leading to the blundering death of the IAD cops, the unveiling of one bad cop, an anticipated but too-brief climax in the L.A. sewer tunnels, and, in a twisty anticlimax, the revelation of a second rotten law officer. Swift and sure, with sharp characterizations, but at heart really a tightly wrapped package of cop-thriller cliches, from the hero's Dirty Harry persona to the venal brass, the mad-dog IAD cops, and the not-so-surprising villains. Still, Connelly knows his turf and perhaps he'll map it more freshly next time out.