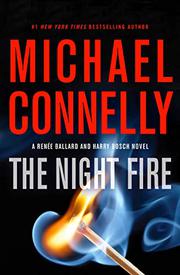 A cold case pulls Harry Bosch back from retirement and into another eventful partnership with Detective Renée Ballard of the LAPD.

The widow of Bosch’s retired mentor, Detective John Jack Thompson, has a present for Bosch, and it’s a doozy: the murder book for the unsolved killing of ex-con John Hilton, shot to death in his car one night nearly 20 years ago, which Thompson swiped from the archives without authorization or explanation. Bosch, who wonders why Thompson lifted the murder book if he didn’t intend to work the case, is eager to take a crack at it himself, but he needs the resources that only an active partner can provide. But Ballard, settled into the routine of the midnight shift after her exile from Robbery-Homicide (Dark Sacred Night, 2018), has just started working her own case, the arson that killed Eddie, a homeless man, inside his tent. As if that’s not enough criminal activity, Bosch’s half brother, Lincoln lawyer Mickey Haller, faces the apparently hopeless defense of Jeffrey Herstadt, who not only left his DNA under the fingernail of Walter Montgomery, the Superior Court judge he’s accused of killing, but also obligingly confessed to the murder. Working sometimes in tandem, more often separately, and sometimes actively against the cops who naturally bridle at the suggestion that any of their own theories or arrests might be flawed, Ballard and Bosch slog through the usual dead ends and fruitless rounds of questioning to link two murders separated by many years to a single hired killer. The most mysterious question of all—why did John Jack Thompson steal that murder book in the first place?—is answered suddenly, casually, and surprisingly.

Middling for this standout series but guaranteed to please anyone who thinks the cops sometimes get it wrong.