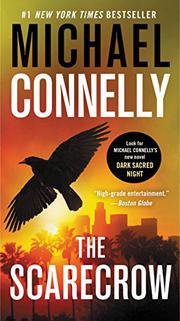 Downsized from the Los Angeles Times, crime reporter Jack McEvoy decides to ride one last big story to the moon.

There’s no mystery about who suffocated stripper Denise Babbit and stuffed her corpse into the trunk of her car, since Alonzo Winslow, 16, confessed to the murder after the LAPD found his fingerprint on the car’s mirror. But when Alonzo’s mother—or maybe it’s his grandmother, or both—nags just-fired Jack to look into the case, he quickly realizes that Alonzo’s confession isn’t a confession at all. And Angela Cook, the twinkie barracuda Jack’s been asked to groom as his replacement, alerts him to the earlier murder of Las Vegas showgirl Sharon Oglevy that has all the earmarks of this one, even though her ex-husband’s already locked up for it. Clearly there’s a serial killer at work, and clearly, though Jack doesn’t realize it, it’s Wesley Carver, a computer-security expert whose ability to track everyone on earth through cyberspace makes him uniquely sensitive to who might be on his case, and uniquely empowered to neutralize them. After losing his bank balance and his credit cards to identity theft, however, Jack is rescued by Rachel Walling, the FBI agent whose torrid affair with him enlivened his last big story (The Poet, 1996). The ensuing cat-and-mouse game, duly played out in chapters alternately presented from the viewpoints of Jack and Carver, is accomplished but not especially suspenseful for readers who’ve seen it before. Despite his cyber-powers, Carver isn’t an especially scary villain, nor does Jack shine as a sleuth. But Connelly (The Brass Verdict, 2008, etc.), who’s nothing if not professional, keeps the twists coming and provides column-inches of background expertise—perhaps more than the story needs—on the hard business of hard news and a realistic preview of Jack’s likely fate.

Middling among the distinguished author’s score of thrillers. New fans hooked by this one will be happy to know that his backlist is even richer.