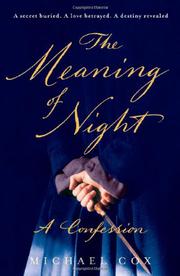 THE MEANING OF NIGHT

A bibliophilic, cozy, murderous confection out of foggy old England.

Mystery writers who have taken up residence in the Victorian era have concentrated mostly on the later years, when Sherlock Holmes and Jack the Ripper haunted the streets of London. Cox, biographer of M.R. James and anthologist of other Victorian scary storytellers, plants his pleasantly meandering story early in Victoria and Albert’s rule, a time when the old class system was fraying at the edges while hungry country folk and proletarians began to push for a bigger piece of the butterpie. Our dark hero, Edward Glyver, aka Edward Glapthorn, has many a grievance to lodge: He is, or at least believes himself to be, or at least professes to be—he’s a most complex fellow, and we can never be sure—a bastard in the classic sense, sired by a booming war hero whom only Aubrey Smith could play. He has also been sorely wronged by the deeply class-conscious, deeply disagreeable Phoebus Daunt, who survives boarding school and all its buggeries and betrayals only to spill out Swinburnesque verse. Annoyed, jealous, downright irritated, E.G. does the natural thing: A bookish sort with a criminal streak a league wide, he slaughters an apparently innocent fellow in the wrong place at the wrong time. “You must understand,” he intones, “that I am not a murderer by nature, only by temporary design.” Ah, but someone has seen, and now neatly nibbed notes are arriving under his door and that of his intended, warning her that she had better steer clear and that he had better watch his back. Who is writing these notes? Who would want to harm our blameless E.G.? Whom should E.G. massacre next to protect his assets?

Cox has a fine time putting all these questions into play in this long, learned and remarkably entertaining treat, which begs comparison with the work of Patricia Highsmith.