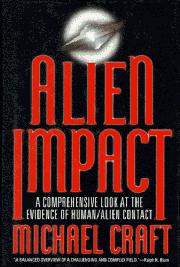 A Comprehensive Look at the Evidence of Human-Alien Contact

Another here-come-the-aliens book that one might be willing to dismiss as mindless entertainment if it weren't so determined to pretend it's serious. Craft (Omega Institute of Holistic Studies) has cast his nets wide and pulled them back full—and he has thrown nothing away. Abductees, medieval elves, crop circles, ghosts, ley lines, Bigfoot sightings, secret government warehouses full of alien bodies: All serve equally as material for his wide-eyed speculation that something out there is trying to get in touch with us. Even folklore, horror fiction, and sci-fi movies are thrown into the hopper on the theory that, if the aliens were adopting a strategy of preparing our minds for their arrival, they'd use this kind of material. For good measure, the author throws in a few of his own occult encounters—a ``ghost dog'' spotted in a haunted house, a weird feeling while practicing tai chi on a Mayan pyramid. The argument rarely stays focused for more than a couple of paragraphs, and it plays fast and loose with science and logic. The author appears to have forgotten the relative distances of Uranus and Neptune, and he dates the dinosaur extinctions at ``hundreds of millions of years ago'' (although he is evidently not sure the giant creatures really are extinct). And he blithely skims over the fact that some of his themes (e.g., von Daniken's ``ancient astronauts'') have been thoroughly debunked. Only a few speculations, such as the ``Montauk Project'' (alleged time-travel experiments by the US Air Force with Nazi assistance), seem too flaky for him to swallow whole. While there is plenty here to give a susceptible late-night reader a good case of the chills, there is little for the intellect to grapple with.