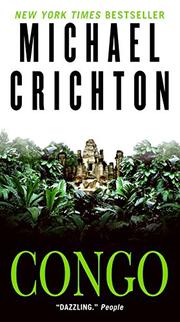 Entertainer-educator Crichton, that clever devil, has done it again—by dressing up one of the oldest book/movie scenarios around with enough capsulized science, history, and geography to keep readers happily on their toes. It's an expedition to darkest Africa, to the northeast corner of the Congo rain forest in Zaire, in search of a lost city (Zinj) full of diamonds and danger. Old hat, right? Wrong. Because this expedition, led by Karen Ross of Earth Resources Technology Services (ERTS) in Houston, is the nth degree in hi-tech—portable computers, laser-beam navigation, satellite TV-hookup with Houston—and the juxtaposition of super-gadgetry with nature at its wildest is simply splendid. Furthermore, since a previous ERTS trek to Zinj was decimated by gorilla-like creatures (according to videotape analysis), primate expert Peter Elliot is along; and with him is adorable gorilla Amy—who understands English and is fluent in sign language. (By coincidence, Amy's been having nightmares about a city that looks just like legendary Zinj.) So there's lively lecture material a-plenty—computers, zoology, linguistics, Congo botany, etc.—as Karen, Peter, Amy, and mercenary Munro (what used to be the Robert Shaw role) head towards Zinj via parachute jump, river-rapids, and mountain-climbing. . . while fending off cannibals, an angry hippo, guided missiles, and sophisticated sabotage by a rival German-Japanese team. (The Zinj diamonds are the raw material for computer-chips that will revolutionize everything.) And when they do arrive at Zinj, where the rival team has been massacred, the ERTS team is soon under attack by this odd mutant killer-gorilla species—descendants of apes who were long ago trained to be ruthless guards of the diamond hoard. Thanks to Amy, however, the team learns enough gorilla lingo to drive the killers off, they find the diamond lode, Karen insists on blasting—and so a nearby volcano erupts, necessitating a balloon-escape finale for this thoroughly diverting diversion. True, Crichton's short-chaptered, constantly challenging smorgasbord approach doesn't quite disguise the lack of genuinely developed storytelling here, and one ends up feeling just slightly cheated: many of the provocative questions raised are never really resolved. But Dr. C. is one of the world's great explainers. And his fascinating lineup of scientific toughies-made-easy, along with the African scenery and the agreeably sentimental Peter/Amy relationship, makes this—page for page—the classiest junk-food entertainment in quite some time.