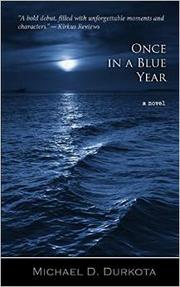 ONCE IN A BLUE YEAR

In this lyrical debut novel, the lives of two U.S. Navy men take dramatic turns after they’re cut from a submarine mission during the Gulf War.

Former submariner Dan has just been honorably discharged from the Navy after damaging his back. His friend and fellow enlistee Nathan wants Dan to stay at his home while he’s in the Mediterranean Sea—during the Gulf War—for six months. Dan agrees because he has nowhere else to go, and he wants to help Nathan’s wife, Heather, with their infant son. Meanwhile, Dan’s former naval bunkmate, Trevor, has been cut from this same mission due to violent, erratic behavior. Attempting to find solace in their lives, Dan takes up photography; Trevor dates the beautiful Tara. Weeks pass, however, and both men have trouble adjusting. Heather, who resents Nathan for volunteering to leave so soon after returning from another mission, is drawn to Dan. Trevor, a brooding man obsessed with physical perfection, struggles with the intimacy that Tara craves. As Heather counts the days of Nathan’s absence on a chalkboard, Dan sets up a darkroom in the basement; he must also decide whether the stability he and Heather need is worth his friendship with Nathan. Debut author Durkota writes a remarkable narrative centered on the afflicted mindsets of his Navy men. With stark poignancy we learn that Trevor “wished he could be as confident around [Tara] as he was on the ship.” Elsewhere, Durkota’s bracing prose conveys Dan’s panic aboard the submarine: “All you can hear is your heart. Blood running scared through your arms and legs. Your mind a grenade.” Thankfully, there are moments of levity, usually involving a sexually overconfident character named Jags. Through Jags, the story also poses some meditative koanlike questions, including, “If you try to fail, and succeed, which have you done?” And while Durkota’s work often feels like a thriller, it’s more of a psychological study in which the characters, like flashes of lightning, are wonderfully alive for a very short time.

A bold debut filled with unforgettable moments and characters.