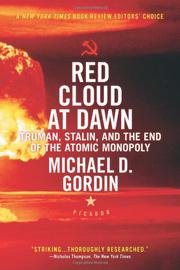 Truman, Stalin, and the End of the Atomic Monopoly

A detailed look at the period between and the first U.S. nuclear test, in 1945, and its Soviet counterpart in 1949.

Gordin (History of Science/Princeton Univ.; Five Days in August: How World War II Became a Nuclear War, 2007, etc.) begins on a dramatic note at the Allied conference at Potsdam on July 24, 1945, when President Harry Truman informed Soviet leader Joseph Stalin of the existence of a new and powerful U.S. weapon that he believed would end the war with Japan. As with many key events in the book, Gordin refracts this private conversation through a kaleidoscope of sources—interpreters and aides on both sides give their versions of how both men acted and reacted—providing the reader with a bright, readable mosaic. It becomes clear that the Americans were somewhat unprepared for the Soviets’ determination to catch up in the new arms race, and the Soviets were able to gather information about American nuclear weapons despite stringent controls. Indeed, the first Soviet nuclear test took place years before the U.S. government had estimated, and Gordin examines how Cold War policies soon took firm hold. The author’s command of this material is impressive, particularly his ability to humanize the proceedings at key moments through his smart choice of sources. The clipped diary of Atomic Energy Commission chairman David Lilienthal, for example, recounts Truman informing him of the Soviet test, and sketches a seldom-seen picture of the president: “He took off glasses, first time I saw him without them, large, fine eyes. Considerate, fine air of patience and interest.” These intimate touches set the book apart from similar histories.

A well-constructed work about a key era in U.S.-Soviet relations.