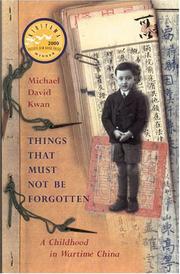 THINGS THAT MUST NOT BE FORGOTTEN

A Childhood in Wartime China

Luminous recollections of a lost world, from an Anglo-Chinese writer who recounts how his privileged and sheltered childhood turned into a dangerous adolescence in war-torn China.

Born in 1934, Kwan was the youngest son of a Swiss woman who married into a Chinese family that traced its lineage back to the Han dynasty. The author’s Cambridge-educated father was administrator of China’s national railways system, and Kwan draws on his progenitor’s writings as well as his own memories in his memoir. Early childhood was idyllic: a warm-hearted nanny took care of him in a house in Beijing filled with beautiful objects, cared for by numerous servants, and the site of elegant parties. When his mother, who mostly ignored him, ran off with another man, Kwan left Beijing to live with a lively Anglo-Chinese family, the Findlay-Wus. As he adjusted to the new household, Japan invaded and occupied large parts of China, sparing only the areas where Europeans lived. After Kwan’s father married Mrs. Findlay-Wu’s sister, Kwan moved back to Beijing and started school, but the war increasingly intruded—especially after Pearl Harbor, when Kwan watched as the Japanese took away his American and British school friends with their parents. Kwan describes the family’s move to Quingdao, lonely school days during which he was reviled for being a half-caste (the Europeans and Chinese were equally racist), the civil war that broke out as Japan was defeated, the arrest of his father (now an intelligence officer), and the family’s ensuing privations. As the Communists gained control, an older stepbrother arranged for Kwan to leave China and go to school in Hong Kong. He would not return until 1987. Permitting himself the latitude usually granted to chroniclers of childhood, the author recalls numerous seemingly verbatim conversations, but these enrich an always absorbing narrative.

A lively account, filled with the vivid details of daily and family life that make the best memoirs evocative portraits of their peoples and their times.